America is a secular nation, but Trumpublicans want to fundamentally change that.

While that may be the fervent hope of the religious right, it is not the America most Americans want. The pushback in Kansas last week is just the beginning. Most Americans want a just, diverse, progressive society. Those desiring a theocracy of some sort need to be reminded of their extreme minority un-American "fringe" status. Ours is the land of the free and the home of the brave. We're not going to give it up to theocratic radicals who disdain reality. 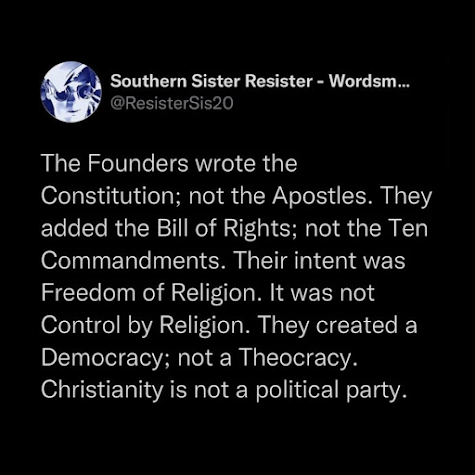 Lauren Boebert, a US Representative from Colorado and the darling of Trump's Deplorables, got her GED after failing the test three times, just before she took office. She also has a police record, as does her husband -- his is for exposing himself to children. Rep. Boebert wants the United States to be a Biblical country based on Biblical Law.

This is what happens when dumb people send ignorant yahoos to Congress:

June 28, 2022: "Speaking at a religious service Sunday in Colorado, she told worshipers: “The church is supposed to direct the government. The government is not supposed to direct the church. That is not how our Founding Fathers intended it.” She added: “I’m tired of this separation of church and state junk that’s not in the Constitution. It was in a stinking letter, and it means nothing like what they say it does.” Her comments were first reported by the Denver Post.

Recently, Boobert has said she wants legislation for "biblical citizenship training." Not only is this unconstitutional, it's dangerous.
It is obvious that this benighted woman has no acquaintance with the First Amendment to the Constitution:
"Congress shall make no law respecting an establishment of religion, or prohibiting the free exercise thereof..."
Nick Carmody JD, MS Psych
@Nick_Carmody
When people who have been conditioned to accept/embrace an authoritarian belief system enter the political arena, it is inevitable that they will eventually weaponize their faith and their followers to create a political structure that mirrors their religious authoritarianism.
Nick Carmody JD, MS Psych
@Nick_Carmody
Militant, 1st Amendment-protected, religion-inspired....hate and division.
"When God is with us, who could be against us"....therefore they have the *moral authority*, with the ends justifying the means, to act ("insurrect") in God's name.
Nick Carmody JD, MS Psych
@Nick_Carmody
· Nov 24, 2019
This is why it's extremely dangerous to have religion intertwined w/politics. Expecting the Christian Right to accept a dissenting political point of view is equivalent to expecting them to accept the co-existence of beliefs in a non-Christian God, or the absence of a God.
Nick Carmody JD, MS Psych
@Nick_Carmody
· Aug 12, 2019
…Religion relies on fear to keep your mind closed, and guilt to keep your wallet open. The fact (and the irony) that religion has become a major constituency in the “identity politics” game (which the Right claims to abhor) shouldn't be lost on anyone.
Posted by Shaw Kenawe at 1:34 PM

Spirituality is a good thing. NOT to be confused with religion. Which has an evil historg.

The Christo-fascists can't even see the glaring truth that they are followers of Trump's hate and lies, rather than followers of their Savior's command to love our fellow human beings.

This cult exists for one purpose. They want to rule and force people they hate to believe in a religion they themselves don't even follow.

They are authoritarian theocratic hypocrites all the way.