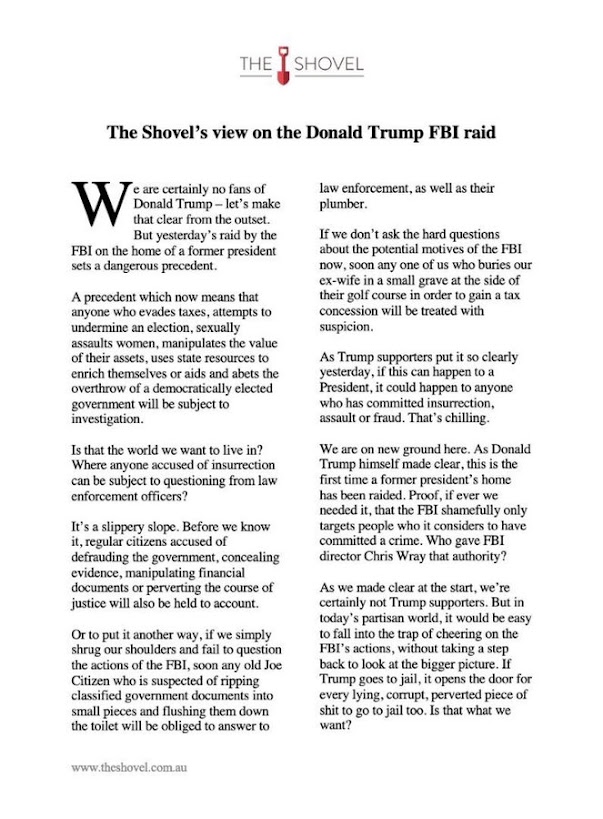 I wondered when I read that on Twitter if it would make its way here.

Great post adding a little humor into the world is always a good thing. The righties are in an uproar because this is something that has never been done to any president but what they forget is trump is not like any president. Yes they have all been narcissists but not to his degree. He is not the worst or best president ever and like his predecessor he could have accomplished great things but they both let their biased agenda get in the way.

It is hard to put any faith in the validity of anything they find because of all the fake charges about russia and steele document and the fact that the DNC started impeachment efforts as soon a -H- got slammed. Then we have an AG who sicks the FBI on parents of achool children because they question their children's education and have no comment on a threat to a SCOUTS life. They need some credible people instead of garland, pelosi shifty and AOC. What we need now is a leader like Reagan to get the country on the correct track.

Hahaha Skud... did you just dream this all up?

Fmr President Trump had some of the most classified material in the US in his possession after his term in the WH ended.

And his declaration that he declassified it before leaving the WH on Jan 20 essentially admits it.

But of course he can't just wave a wand a declassify something, despite his belief he is a King.

Tell me why you have no snark, no sideways statements, no real denunciations of a man who illegally had US docs in his possession. But before you do, ask yourself why the docs he had dealt with our US nuclear stockpile and the US signal intelligence system and capabilities?

Your petty differences with Obama and Biden should pale compared to the implications of what Trump is doing with those docs.

And yet it does not.

A. Not done 'to' a president but done BY a president - a criminal president, actually.
B. Obama was an excellent president to most Americans and had not even a whiff of a scandal in 8 years of expanding rights and an excellent economy that he rescued from the last waste of flesh GOP creep.
c. Nothing 'fake' about the Russian Collusion scandal. Hint 138 charges filed.
d. Still waiting for some evidence of your whole FBI going after parents BS. Sorry Skiddy, but your credibility is shot.
e. Interesting (not) that you only mentioned Democrats as being non-credible. Hmmm.
f. No really, F. I should probably say EFF as in EFF Reagan - one of the very worst pieces of crap to ever infest our White House. We can thank him for getting rid of The Fairness Doctrine which has led us to both sides with their own media outles and neither side believing the other is real news. Thanks a heap, Ronny Raygun. Oh yeah, and the homeless crisis -- yeah, thanks for the too you worthless old fool.

Okay Skiddy, no thanks are needed for correcting your work. You'll need to do much better if you hope to graduate with the rest of the 'held back' bunch.

The twice impeached defeated former guy took home documents that were so secret that they couldn't be listed on an inventory. Word on the Twitterverse is charges of espionage are possible.

The former guy doxed the FBI agents serving the warrant. These are Law Enforcement people just doing their job, something I've heard you support before so which is it? Also, of course you believe the evidence was planted lie. Good thing for the rest of the USA the search was filmed to prevent stupid accusations like the nonsense you spout above. I bet your next comment will bring up Obama and his 30 million pages of documents, amirite?
(Narrators voice: The National Archives has already debunked this lie.)

The judge who signed the legally obtained warrant has been doxed and threatened and all I get from you is crickets because there was that one crazy dude who wanted his 15 minutes of fame by trying and failing to attack Kavanaugh. Either threatening a judge is verboten or it isn't. You seem to believe it depends on their politics. See, I believe doxing a person is wrong no matter what side of aisle they sit on.

The talking point you repeat (again dude, you need fresh material!) of the FBI attacking helpless parents (who in reality were performing acts of violence against school board members so yeah, arrest those law breakers) has been debunked by Shaw more than twice and yet, you ignore her research and call her a liar without saying anything directly. Kind of disrespectful, if you know what I mean.

Reagan, that's who you want in power again? The man who went behind everyone's back to make promises with enemies of the USA so he could win an election? The man who knew many gay men from his time as an actor only to turn his back on them dying with the new disease which turned out to be AIDS? A man who embodied cruelty is the point? The man who was so riddled with dementia he had no business holding power? Of course you do.

skud, whatever good will you accrued in the past your current comments reveal more about you than you intend and not in a good way. I truly believe you'd cut off your nose to spite your face if you thought it would make a liberal cry.

The Shovel has been posted all over the interwebz this week. It's a welcome respite from the nonstop HOLY CRAP revelations coming from the FBI's search of Mara Lago.

So many questions unanswered. So many comments from people waking up for the first time in years to the fire that surrounds them.

I look forward to Garlands end game, because you know he has something more up his sleeve. I watched his press conference yesterday and I've never seen Garland so focused and intent. Like a duck in the water above may be calm and serene but below the feets are paddling to beat the band.

"The presidency of Ronald Reagan in the United States was marked by numerous scandals, resulting in the investigation, indictment, or conviction of over 138 administration officials, the largest number for any president in American history."

skud and other Repubs want someone like the disgraced Reagan back in office! There seems to be a pattern here:

Nixon: Had to resign in disgrace
Reagan: 138 in his administration investigated, indited or convicted of crimes. Iran/Contra Scandal
GWB: Dragged America into an illegal war in Iraq and his Veep, Dick Cheney is an international war criminal
Trump: His scandals, corruption, and criminal activity is epic. The only POTUS impeached TWICE, the only POTUS who lost the popular vote TWICE, the only modern POTUS who refused to concede the election and not show up at the transfer of power, AND THE ONLY POTUS who incited an insurrection against his own government, caused LEOs' deaths, and said his Veep deserved to be hanged!

It almost makes ME nostalgic for a POTUS whose worst scandal was getting a BJ in the Oval Office!

skud and others always throw mud at President Obama, the only POTUS in recent history who had no scandal in his 8 years in office!

Right now, what used to be the Republican Party is going headlong into authoritarianism and supporting white supremacist thugs who are calling for the death of law enforcement agencies and their employees.

If you read the Geeez blog, you will read what the far right Trumpers think, and it's appalling because most of it is FAUX NOOZ, Newsmax, OAN propaganda which they mindlessly parrot. Plus they admire a corrupt, criminally minded ex-president. They are a microcosm of the party that was once called the Republican Party. That no longer exists. It's now a proto-fascist party -- the Trumpublican Party.

Perfect description of the Trump supporters:

"When you watch the collection of nincompoops whose professional lives are organized around defending Donald Trump — the Fox News hosts, the backbench members of Congress, the far-right social media personalities — it’s easy to conclude that, to quote Trump himself, “they’re not sending their best.” But they know their audience, and they’re very good at identifying what that audience needs to hear, then repeating it over and over." --Paul Waldman, WaPo

That must be some good s*it you're partaking of. Obviously causes delusions as you depart from actual truth and reality.

I need to subscribe to whatever this group has access to. You guys and gals are fantastic knowing what was taken from trump before it is published. As to Reagan, he took the country from the carter disaster to prosperity in a short period of time, united Germany and was well respected both here and abroad.

As to the swell guy, he was on a mission to ruin the middle class and small businesses of which I belong. I realize you being in a financial class way above me did not feel the wrath of his administration. Other than encouraging terrorist nations and billing taxpayers for a worthless health system he was a swell guy.

Now we have a democrat president who is out to destroy the fossil fuel industry in his mentors footsteps. He is giving tax credits to the urban rich to buy electric cars and offering to pay tuition for rich kids who chose a degree path they cannot pay for. Hiring 80+ thousand IRS agents to audit anyone making over 70k while paying no attention to the crisis at the border. Who pays for all this, the working middle class because the rich find a way around it. Blame the corporations who take advantage of the tax code our politicians put in place.

I don't like the republican party because they have turned into a bunch of loons but the democrats have turned into the party of the egotistical rich. Lets pass this bill and call it inflation reduction which we created and bill the working taxpayer.

Skiddy, you are welcome to your opinion of Ronny Raygun but, those are merely YOUR opinions and not truth for millions of us.

So, President Obama was out to destroy the middle class, according to you. Why then did the middle class expand to historic levels during his first term? Every group, age, race, gender and age of Americans did better and home ownership also hit historic levels. He also saved the American auto industry, provided health insurance to millions of our citizens and, according to multiple surveys, saved tens of thousand of lives every year. The few people paying more for insurance mostly had crap insurance that covered almost nothing and did little to solve the problem of no or under insured people.

I only wish Biden was out to destroy the polluting, world damaging dinosaur goo industry. Sadly, he isn't but he is smart enough to know that the age of oil is ending and we must have a good alternative at the ready. I'm getting tired so I'll just ignore the rest of your usual whataboutism blather.
If I knew what it was that we were subscribed to, I'd happily buy it for you, Skiddy. Lard knows you could use the help in the Smarts Department.

Sounds an awful lot like rich cons and libertarians bitching about having to pay their fair share skud.

RN, What do you consider a fair share. Should the 57% who pay zero FIT pay some or the 43% who pay FIT pay more than they do. Share what you believe a fair share is and should it be fair for everyone but that would be the Fair Tax which takes the power of the tax increase away from the political elite.