99% Est. Vote Counted
I guess Esk was a bit too crazy, even for red, red Oklahoma!
NEW: A Republican candidate in Oklahoma said he wants gay people to be stoned to death. He told reporters his position “simply makes me a Christian.” 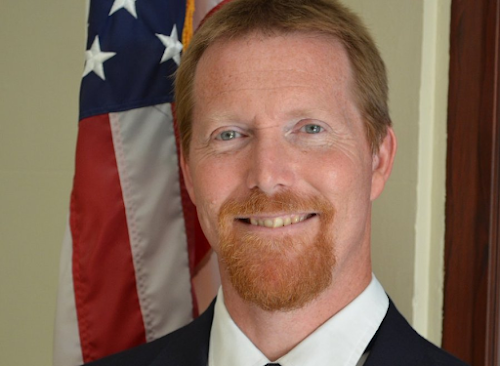 A GOP candidate in Oklahoma [was] getting attention for comments he made several years ago when he justified the death penalty by stoning for gay people.
When asked recently about it, he didn’t disavow his previous comments. Scott Esk, 56, [ran]  in the Republican primary runoff election Tuesday for a seat in the state house, and local media [was] bringing up some extreme comments he made in the past. He [didn't handle] them well.
In 2013, Esk was commenting in a Facebook conversation about the Pope saying that he couldn’t judge gay people. Esk posted some Bible quotations, including the part of Romans 1 where the Bible says that a long list of people who sinned is “worthy of death.”
Another person asked him: “So, just to be clear, you think we should execute homosexuals (presumably by stoning)?” Esk responded: “I think we would be totally in the right to do it… Ignoring as a nation things that are worthy of death is very remiss.”
A year later, a journalist asked him about those comments. He said it was “totally just” to kill gay people. “What I will tell you right now is that that was done in the Old Testament under a law that came directly from God,” he said at the time. “And in that time, there was, it was, totally just came directly from God.”
Remember this sort of homicidal madness when you hear that Talking Potato from Colorado, Lauren Boobert, say we have to be a Biblical Nation under God.
The thought never occurs to these self-righteous idiots that their claims about what should be done to gay people matches EXACTLY what fundamentalist Muslims believe should be done to gay people.
They should get together and exchange their ideas on how to kill people they believe their god hates. They have so much in common.
Posted by Shaw Kenawe at 6:00 AM

First, I'm not entirely convinced that the Leviticus 18:22 text which reads "Do not have sexual relations with a man as one does with a woman; that is detestable." was translated correctly, meaning the language back in the day was massively open to interpretation by the person doing the reading. It's been suggested that instead of condemning male on male sexual relations that the reference was talking about adult/child sex, which is to me absolutely verboten. Consent matters and children can not legally give consent.

Second, if Christ came to fulfill the Old Testament Law which is why modern Christian Fascists can have tattoos, eat bacon and shrimp, and wear mixed fabrics why is that same law unfulfilled when the subject of LGBTQA+ is raised in conversation?

Another Old Testament sin worthy of death is adultery, so is Mr Esk advocating this same penalty for most of the GQP?

There is a reason the founding fathers placed the Constitution and not the Christian Bible as the document to govern the new nation, not that Christian Fascists like Ms Boobert understand this fact.

They love to deny evolution too, yet are a perfect showcase of exponential evolution, or more accurately de-evolution.

All of this boils done to is simply this... Christian extremists othering all those groups they disapprove of and wish they could make disappear.

Let me say, because he comes from my tribe, that his views do not represent the mainstream of Christianity. Nor for that matter do what I would characterize as the extreme views towards abortion. I'm talking about the ones that make it illegal for victims of rape, incest and abuse to get abortions.

The great majority of people I know, across ideological lines within Christianity are just not as extreme as these folks.

The problem is they will not police their own and call ppl out for holding those extreme views. So the louts with the biggest microphones get the attention. It's as if they are living some Lord of the Flies the enemy of my enemy is my friend.

Even if he, or she, is extreme.

Because criticism could bring defeat, isolation and ridicule.

Unless a person can read greek and has an original copy of the bible, and knows the culture from 2000 years ago, they have no idea what the bible really says.

"Let me say, because he comes from my tribe, that his views do not represent the mainstream of Christianity."

Most reasonable people, I hope, know this. I have Christians in my family who do not come even close to the beliefs Esk holds. What's a rotten shame is the crackpots, like Esk, who run for office and share their skewed fundamentalist ideas with the public and give the impression that all Christians are as meanspirited and full of hate as he is.

Let's be grateful he lost.

That Esk character lost and we're well rid of him. But many kooks like him abound in the Christian religion, as kooks abound in all religious sects. Unfortunately, in this country, they're in charge of the GQP at this time.

Amazing how far the once proud Republican Party has fallen and is run by kooks, clowns, and anti-democracy Trump worshippers.

RN I've always said that the extremist Christians are very much like the extremist Muslims in their zeal to kill members of the LGBTQ community. The Esk guy is not alone in that desire. I've read other extreme Christians who share his desire to murder.

Mike How many times has the Bible been translated into different languages? Each something gets added or changed.

Any group of devout believers in any religion is a danger to a secular society.