PRIVATE CITIZEN FLORIDA GUY GETS CAUGHT WITH TOP SECRET DOCS THAT BELONG TO US GOVERNMENT -- GOES ON A RANT -- PROVES HE'S AN UNSTABLE KOOK! 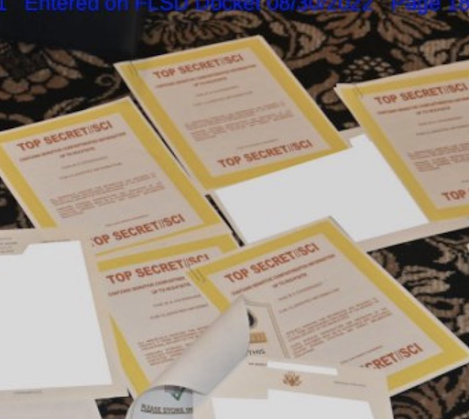 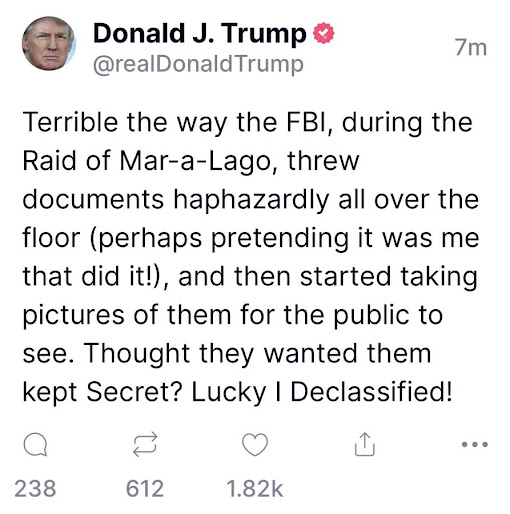 This is from Fox!:
Steve Doocy: “Keep in mind, according to the filing, the agents found three classified documents in Donald Trump’s desks.  What were they doing in the desk?!”
This:
DOJ in new filing last night regarding Mar-a-Lago search:
Luke Broadwater, NYTimes: “The government also developed evidence that government records were likely concealed and removed from the Storage Room and that efforts were likely taken to obstruct the government’s investigation.”
Luke Broadwater, NYTimes Congressional correspondent:

“That the FBI, in a matter of hours, recovered twice as many documents with classification markings as the “diligent search” that the former President’s counsel and other representatives had weeks to perform calls into serious question the representations made…”
A key moment: "The former President’s counsel explicitly prohibited government personnel from opening or looking inside any of the boxes that remained in the storage room, giving no opportunity for the government to confirm that no documents with classification markings remained"
Another important point from the filing: The documents Trump took to Mar-a-Lago were so sensitive that "even the FBI counterintelligence personnel and DOJ attorneys conducting the review required additional clearances before they were permitted to review certain documents."
Donald Trump, his attorneys and maybe others, conspired to hide documents that did not belong to them. That alone is illegal. The fact that they were top secret puts the entire nation that they all swore to protect at risk.
Trump is a criminal and a danger to our country. What verbal and mental gymnastics are his co-conspirators in the Trumpblican Party and on FAUX NOOZ going to go through now?
Lindsay Graham said that if Trump is indicted there will be riots in the streets. Then so be it. As all those so called “patriots” have said many times. Freedom isn’t free.
If these apparent criminal offenses are not prosecuted as they would be for any citizen, then Trump will have succeeded in damaging America's justice system.
ETTD!
LOL!
Rob Reiner
@robreiner
Donald Trump wants to know why people are so mean. I want to know why people who lead an armed Insurrection to overthrow the United States Government then steal Classified Top Secret Documents are not behind bars.
Posted by Shaw Kenawe at 10:31 AM

Certain bloggers want to know why we are all suddenly...

BTW... I think Skud lives or is from Mississippi. I hope with all the rain, he and his family are dry, and well.

I know skudrunner lives in the South, but I don't know which state. If it's Mississippi, I hope he and his family are okay.

My brother just moved to Mississippi last winter, but is not near where the floods are.

"Certain bloggers want to know why we are all suddenly...


Those folks don't read or listen to anything that isn't Trump friendly. So, of course, they have no idea of how serious this all is.

Truly, they are so child-like in their slavish loyalty to the most corrupt and lawless ex-POTUS this country ever had the misfortune to have in the WH!

They are to be pitied.

I think it's critically important to keep pursuing Trump's lawyers and his circles of supporters and co-conspirators. Politics cannot be ignored, and politically, nobody cares about Trump's lawyers. If they are disbarred or indicted, there will be no political backlash, no riots, no death threats, and probably no tweets from Trump, because he doesn't care either.

But the more his supporters realize that doing Trump's work is aiding and abetting crimes, the more Trump is disempowered. It'd be great to see Trump successfully prosecuted, but I don't think that will happen. So, get his enablers, and the message will be understood.

The entire Trumpublican Party, save a few, are complicit in their silence, misdirection, obfuscation and lies. The TP is an accessory to the crime IMO. It doesn't have to be this way, but moral courage is in short supply for just about all of them. This includes, IMO, the Trumpian bloggers who are often cited here

I hope I live long enough to read the histories that will be written about this period, because when its all said and done I don’t think it will be the relatively minor grifting that DJT has engaged in (Trump hotel in DC, Trump University, etc., etc.) that will be the big story. Rather I think it will be his relationships with foreign powers (Putin, the Saudis) in which he may have acted as a traitor of opportunity, for cash and favors, from the protection of the Oval Office. I’m pretty sure Cadet Bonespurs has not one molecule of true patriotism nor love of country in his big flabby body. Attaining the Presidency, in his sick mind, was just the opportunity to scam at the highest level. “Made it ma! Top of the world!”

Forest and Trees. Some people are so focused on the trees (trump) that they can't see the forest. Trump will be indicted and the courts will determine what happens from there.

The forest is crippling inflation, open border, inhumane treatment of the illegals crossing the border, gas prices that are still to high, at least for the US, massive buy a vote programs and shifting the payments to the taxpayer, teachers, unmotivated work force with low participation rate, china is buying us, we are going to give iran nukes, you must purchase a battery car even though you can't charge it. When we shut the country down it was just for political reasons because the science was not accurate and now everyone is paying the price for our incompetence.

I do understand the reluctance of the left to look at aviator joey in a honest light but it is you and your kids lives that are affected every day. Unfortunately the only two candidates who are competent are desantis and gabbard. That would be a good match if one of them will switch parties.

Thanks for the well wishes from some but we are feet dry. Some friends not so much.

It's actually much simpler than that skud. The forest is the ignorance folks suffer from and the trees reflect the greed. The nation's (actually the planets) two biggest problems. Always have been and likely always will be.

Gabbard or Desantis? Yikes! I certainly want no part of a world where those two fascists are in charge, thanks.
Skiddy, you really should see a doctor about that BDS you've got. It seems to be destroying you from the inside out.
Glad you and yours are safe and well.

Blueballs, I understand your concern about desantis. He was not for the lock-down, which turned out to be a disaster, and is for parents having a say in their children's education. Gabbard is a moderate democrat who agrees with desantis. Neither of these ideas are popular with the left leaning especially the teachers union. If he is doing such a horrible job why are people flocking to Florida and leaving California. Government wants to control their subjects it just seems like the conservative side of republicans draw a line at reasonable and not a line and the sand.

Anon, I will assume you do not agree with the issues facing the US. What was stated that was not correct. Is it greed to make everyone pay the bills for the privileged few. According to every study college graduates make far more than those who did not get a degree. Is it greed to want to have our laws enforced and is it greed that wants to have a secure country and congress to do their job.

His 'position' on the lockdown is estimated to have caused the death of several hundred Floridians, if not many more. I'd say any parent who wants to pick and choose the content of their child's education should probably get off their lazy behind and home school their little brat instead of limiting the scope of education for all the rest of the children.
People flock to Florida for the same reason as always - This is paradise. That, coupled with no income tax (which existed long long before Desantis and was the creation of Gov. Childs - a Democrat.
But hey, nice try, Skiddy. Good luck with your crippling BDS.

Ignorance - the failure to recognize our true nature and that we are, in essence all the same

Greed - reference is primarily to coorporate greed & self interest at the expense of the communities greater good. But, it also applies to others than just corporatios and their political allies in the government. Trump immediately pops to mind in a very big way.

I suspect skud that you're much to busy running your successful business to seriously contemplate the deeper reasons behind the problems we face both as a nation and a member of the global community. I've found that to be common. In BOTH political camps to some degree. It is a shame this nation has fallen so far. To a point where one political party has turned into a cult of personality and generally refuses to compromise for the benefit of the nation as well as the greater global community.

Glsd your dry and safe.

Blueballs, I guess all those deaths were from people who were otherwise healthy in a state know for it's elderly population. Most parents want a say in the child's education. Maybe we should go to a full voucher system for education so parents could choose where to send their kids. I try not to refer to children as brats but call the what you want.

I didn't know Chiles was in office in 1924 when Florida passed an amendment to the Florida constitution preventing the collection of a state income tax. He wasn't even born yet so it was a really impressive feat.