Notice where the highest rates of teen pregnancies and birth rates are (and the lowest).

The Trumpublican/Conservative/ Traditional Bible Belt has among the highest rates of teen pregnancies and birth rates. The lowest? Traditionally Liberal/Blue states.

As much as some people wish that teenagers would remain abstinent, we all know that isn’t a reality in which we live. Restricting someone’s rights to do something rarely ever makes them stop doing that particular thing… It just makes them do it in secret and then have to deal with the consequences in a dangerous way. 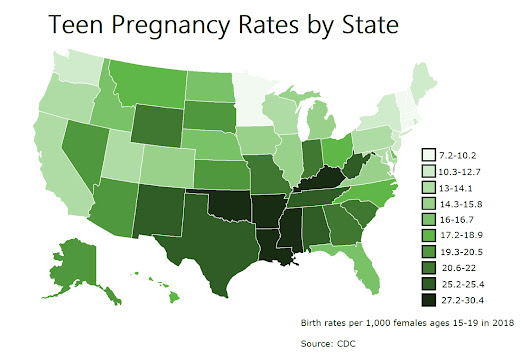 We think it is safe to assume that most teen pregnancies are not planned and often happen by accident. Considering that this is the assumption, there should be something in place to help these kids decide what the best thing for them to do in their life is… But that isn’t the reality. 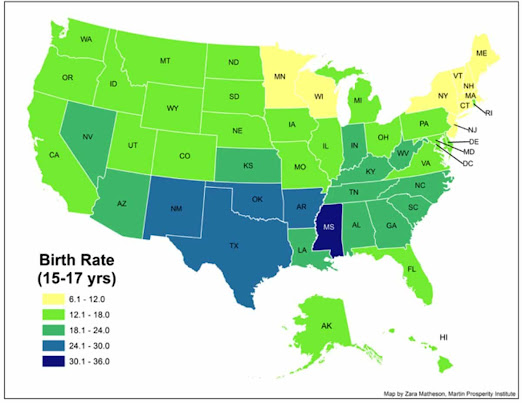 Instead, they often have to give birth to these babies… Here is a map that outlines the birth rates of teenagers aged between 15-17 in America. We know what you’re thinking, 15-17 is a very young age to have a child when you yourself are essentially a child as well.
Posted by Shaw Kenawe at 5:30 AM

So the further south you get, the more dumb f**ks there are. Literally.

The most effective organization that reduces the number of abortions is Planned Parenthood.

Unwanted children are expensive to society.

Reified religous dogma Trump's logic and reason for the folks of Christiandom. Simply put, they punish and then put their blind faith in god. Everyone but them see how thats working out.