And now for something completely different...


The newest fashion for summer: 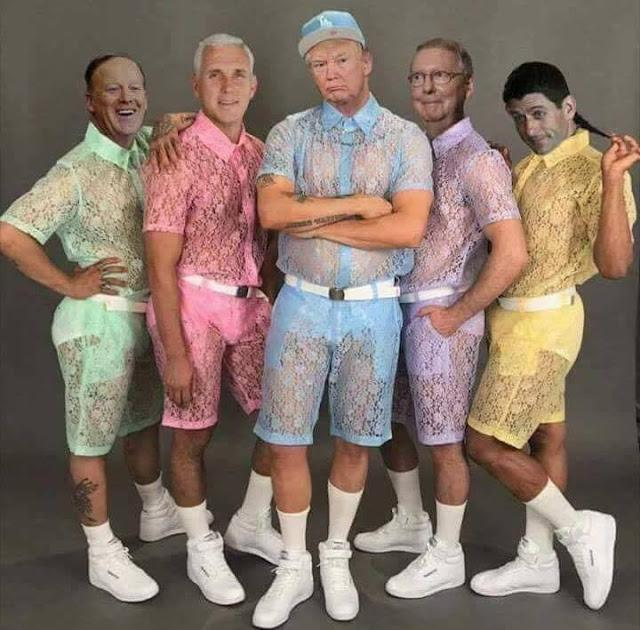 Note to self -- buy 30 gallons of industrial bleach for your eyes.
In other news, Elton John just turned straight after seeing that picture. :)

Hey Brainstorm!
Wake up, your always calling Donald Trump the laughing stock !
Yet YOU and your Progressive ILK praise the likes of Hillary Klintoon, and Susan Rice, and morons like Nancy Pelosi, John Kerry and the rest of that old Gang of Knuckle Heads . No Trump is not the "Laughing Stock"!
The laughing stock is the bung of Lying idiots who are responsible for Benghazi! , the laughing stock is Crook who lost the election with the lowest amount of states won since 1994. The laughing stock are the people who think that the amount of votes won y population is actually the winner. And the laughing stock is people, who think that the voters are nothing but stupid racists. There's a whole middle of this country that sees this stupid Protesting stuff, with all these Pussy Hats and Hollywood Vulgar speakers are trying to act like they know what their doing . Or a few Black Lives Matter wise asses acting tough and cool. These are the jackasses who are the Laughing stock. The same people who want the transgenders using all the Bathrooms and that nonsense, are Laughing stock! The same people who watch campus students loose their mind when someone they disagrees with them comes to speak. Or Liberal Comedians holding up the head of our President and tv shows making fun of all this ridiculousness, and thinking it's funny,they are the Laughing stock. Watch the news or the late night TV shows with Alec Baldwin , and Tina Fey, or Steven Colbert, thats the current stupidity being demonstrated y the talentless clowns prop are watching these days. And by our college kids who are supposed to be receiving higher education. We are producing an generation of morons, and that's not a laughing matter. Maybe You just haven't noticed it yet.
But that's what we should be concerned about .... not the dumb, and stupid childish pranks we see every night on these dumb TV shows. Like who could make our President look more stupid then the next guy.

Well thank you "Shaw's nemesis, Joan," for your garbled contribution. I especially liked this:

Is that where Trump finds his support? At "the bung of Lying idiots?" It would seem so.
Apparently, you visit there often.

"...the laughing stock is Crook"

Would that be Captain Crook? Tell us.

"Like who could make our President look more stupid then the next guy."

"The same people who watch campus students loose their mind"

"We are producing an generation of morons, and that's not a laughing matter. Maybe You just haven't noticed it yet.

Oh, but you're wrong, "Shaw's nemesis, Joan," I most assuredly have noticed. Q.E.D.

Shaw, I love how the people who decry our education system here in the US can't even form complete intelligent sentences.

With smart phones and autocorrect, we can forgive a few typos here and there, but these people are rich.

They couldn't diagram a sentence if their life depended on it and they're too confused to care.

Joan's comment is a nice bookend to the boys in the lace rompers...

This picture adds a whole new meaning to transparency in government.

I hope they come with an elastic waistband for Lord Dampnut.

BlueBull, LOL! I actually like to see fashion upending what we believe is the "norm." IMO, masculinity isn't expressed by what one wears. One is masculine simply by being male. The accepted definition of masculinity is one who is "aggressive and strong." I've know many a manly man who were neither.

I am not a mental health expert but like many fairly perceptive people I can spot an unhinged mind. It is a natural skill developed over almost 80 years and encounters with a few of them. Trump exhibits signs of mental illness in so many things he does. He may be capable of living with humanity but he sure as heck should NEVER be in the WH. He is not insane but has so many mental issues that he is not competent in his present position. Our Electoral College badly neglected its constitutional duty to the American people by allowing him to assume office.

I'm with Dave. I thought the photo was the funniest thing ever til I read Joan's comment. I think you should keep her, Shaw. BTW, I'm not from Hollywood (can't believe she didn't go with Hollyweird), but I am fluent in Vulgarese.

Joan, Joan, Joan . . . SMDH Back to the swamp with you! It's so sad just how utterly uneducated most of the right has become these days.

The "Free Twinkies" troll is an identity stealer, probably from the Stench Trench. A "Free Twinkies" has commented here in the past, and I've been notified that the one who posted here today is an impostor.

Hi Shaw been meaning to ask for a while, what's the stench trench?
Great pic!

Cok Burger, the Stench Trench is a rabid far right blog a/k/a The Sh*t Pit, The Crap Trap, The Skank Tank, The Sump Dump, The Trog Blog, etc. It's registered on Blogger as "Who's Your Daddy."

It's famous for publishing horrendously racist and pornographic images, and mind-numbingly dumb comments, and false facts. Some people believe it's actually a parody of far right wing bloggers, since it's so raucously awful. A lot of its regulars are faithful readers of my blog who copy and paste material from P.E. into WYD's comments. Sometimes I publish some of their trolls' who visit here comments because we all need a good belly laugh once in awhile in the Age of Trump.

Thanks Shaw. I had a quick look at the site. Off for a shower now!