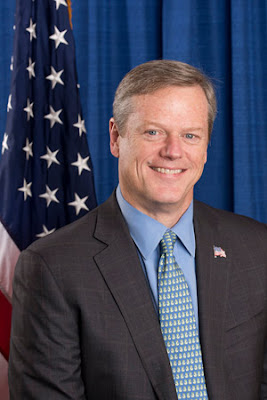 Massachusetts Republican Governor Charlie Baker, the most popular governor in America with a 75% approval rating, is joining a coalition of mayors and governors to bypass Trump's withdrawal from the Paris Climate Agreement.

Massachusetts, a very blue state, has a long history of electing moderate Republican governors, a good thing, since the state legislature is run by the Democrats. This has maintained a balance of power. The difference between our state politics and Washington DC, is that our Republican governors are not ideologues who put party above state -- these men (and one woman Republican governor) work together to solve state issues.

I don't agree with Governor Baker on every issue, but I have confidence that he has the best interests of our Commonwealth when he approaches solving our problems. Cooperation and compromise have helped this state in achieving high marks in education, health care (Romneycare), the economy, in being business friendly, and many other quality of life issues. We have our problems, but we have a governor and legislature that work together to solve them. We're not a divided state even if our state government is headed by a moderate Republican with a Democratic legislature.

And here's the upside to finding ways to work together instead of demonizing political rivals.

Interesting fact:  Massachusetts was one of only two states where every single county rejected Trump and went for Hillary Clinton. The other state was Hawaii.

Massachusetts is also the best educated state in America. You can draw your own conclusions from that fact.


BOSTON (CBS) — In a glowing report citing education, health care, and the economy, US News & World Report ranked Massachusetts the best state in the nation in a study released Tuesday.
“Its vibrant academic environment, innovative and supportive health care policies and modernizing economy, measure for measure, make this small New England powerhouse with a population of 6.8 million the strongest state of all,” the study reads.


Gov. Charlie Baker couldn’t agree more. He joined US News & World Report editor-in-chief Brian Kelly on CBS This Morning Tuesday to react to the honor of being ranked first in the country.


Here's Governor Baker's response to Trump (whom he declined to support in the 2016 election) and his withdrawal from the Paris Climate Agreement:


Gov. Charlie Baker and Vermont Gov. Phil Scott, two of the four Republican governors in New England, announced late Friday afternoon that they would join a coalition of states committed to fulfilling the tenets of the Paris Climate Agreement despite President Trump's decision this week to withdraw from the international pact.

Baker had said he was disappointed in Trump's decision and committed to promoting clean energy and reduced carbon emissions in Massachusetts, but demurred when asked earlier in the day about joining the coalition. Over the course of the day, Baker's office said the governor was able to connect with Scott and New York Gov. Andrew Cuomo, one of the founding members of the U.S. Climate Alliance.

"As the Commonwealth reiterates its commitment to exceed the emission reduction targets of the Paris Climate Agreement, today we join the U.S. Climate Alliance to expand on our efforts while partnering with other states to combat climate change," Baker said in a statement.

"After speaking with Governors Cuomo and Scott, our administration looks forward to continued, bipartisan collaboration with other states to protect the environment, grow the economy and deliver a brighter future to the next generation."

Baker and Scott wrote to Energy Secretary Rick Perry last month urging the Trump administration to remain in the pact, and Perry was reportedly one of the officials who advised the president not to withdraw.
Posted by Shaw Kenawe at 10:16 AM

Will American conservatives and the GOP someday embrace the rational and commonsense style of leadership of Governor Baker at the national level?

The nation can only hope.

To the Anonymous who posted a comment here. It had nothing to do with the post, so it was deleted.

RN, I think once this country gets over the fever it had when the minority elected Trump, we will recover from the worst president ever. I hope.


I've been noticing that the lower President Two Scoops falls in the polls, the nastier and more desperate his fanclub gets. They're spitting firecrakers of rage these days, and it's funny as hell. Their "hero" is hated around the world and by a majority of Americans, he's mocked and disrespected universally, and rightly so. the only people support the jerk are jerks themselves.

I remember a time when most Republicans were like Gov. Baker. Ya know - sane. Sadly, those days seem long gone.

BlueBull, I think what drove them insane was the election and re-election of the Black Guy. They're still not over their outrage. The sad part of their rage is that everything they whined and complained about in Mr. Obama is exactly what they've got in Trump.

Trump has golfed exactly 21 times more than Mr. Obama had at this point in his presidency, and the rest of the civilized world as well as the civilized people in this country see Trump as the immature school yard bully that he is. A man-child in the most important job in the world, and he doesn't know anything about his duties, our history, or diplomacy. He's got three CRIMINAL investigations into his dealings with Russia, and he hasn't passed any legislation. He's actually a simpleton who never had to account for his horrid treatment of other people. He's had a very rude awakening since he became president.

He's getting no respect from other world leaders, and he's not liked at all here at home, except for the swamp dwellers and a few loony bloggers.

The progression to their insanity goes all the way back to Ronny Raygun and his killing the Fairness Doctrine. Doing away with that allowed folks like Limbaugh and eventually Faux Noise to chum the waters of the borderline personalities among us. Before long they were listening to and believing everything they were being fed from the right wing bubble. That poisoned the minds of millions and brought us to the sad place we are in today. Is there a Liberal bubble? Sure. But most of the sources the right whines is part of the 'liberal media' (which to them is anything that doesn't sound the same ding dong crap they want to hear), are not very 'liberal' at all. CNN, ABC, NBC, CBS, most newspapers are just reporting the news. The right hates that because facts are usually not on the side of the right.

BlueBull, this a dark and ugly time for our country. The far right has no idea of how much they've contributed to the degradation of America.