In case our Conservative friends have forgotten, here are some reminders:

Several conservative bloggers and news sites are claiming the Left owns the tragic shooting of Steve Scalise and others because of the Left's violent rhetoric.

Their memories are selective:

Sharron Angle, the Tea Party candidate turned Republican primary winner in Nevada, has taken heat for a number of extreme affiliations and policy positions. One of the more outlandish was a statement she made during a radio interview last January in which she floated the idea that the public would bring down an out-of-control Congress with “Second Amendment remedies.”


Trump was discussing the possibility that Clinton, the Democratic nominee, would be able to appoint liberal justices to the Supreme Court if she wins the race for the White House. He then said that there was nothing that could be done in that scenario, before mentioning “Second Amendment folks.” “Hillary wants to abolish, essentially abolish the Second Amendment,” Trump said to boos from the crowd. “By the way, if she gets to pick her judges, nothing you can do folks,” he then added. “Though the Second Amendment people, maybe there is, I don't know.”


Nugent’s 2012 comments about Obama — who he has called a “piece of shit” and a “subhuman mongrel” — are far from the only threat he’s made against prominent Democrats.

As the Daily Beast chronicled, Nugent discussed shooting Harry Reid during the National Rifle Association’s annual meeting in 2015. In January 2016,

He called for both Obama and Clinton to “be tried for treason & hung.”

Nugent once called Clinton a “worthless bitch” and called for her to “ride one of these [guns] into the sunset.”

He told Obama to “suck on my machine gun.”


By CHRIS CAROLA - Associated Press - Friday, December 23, 2016 ALBANY, N.Y. (AP) -
A wealthy businessman who co-chaired president-Elect Donald Trump’s state campaign confirmed to The Associated Press on Friday that he told an alternative newspaper he hoped President Barack Obama would die from mad cow disease and that the first lady would “return to being a male.”

Carl Paladino, a millionaire real estate developer who unsuccessfully ran for governor in 2010 as a Republican, made the comments in response to a survey by Artvoice , a Buffalo publication that asked local artists, performers and business owners for their New Year’s wish list.


Bannon joined a conservative Facebook group that has featured racist and extreme material. This material includes posts urging a military coup against President Barack Obama, featuring an image of the president dressed as an SS officer, celebrating the Confederate flag, highlighting a photoshopped picture of Obama with watermelons, praising a police officer who called Obama a “F*cking Nigger,” and calling for Obama to be “executed as a traitor.”

The Georgia senator invokes a psalm calling down divine wrath on an enemy—but insists he meant no harm. 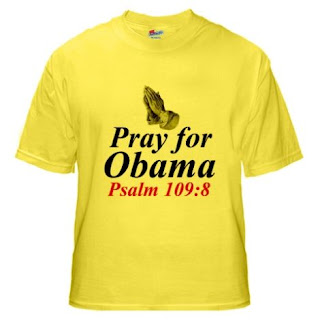 "Pray for Obama—Psalm 109:8" on the highway, only to look up the verse and find, "Let his days be few; and let another take his office." People — like the commenter "Panama" on INGunOwners.com, to pick one guy completely at random — think this is "too funny." The next verse in Psalms is, "Let his children be fatherless, and his wife a widow."


And finally, here's a blog that allowed a commenter to call for the assassination of President Obama (the comment was never deleted.)

"Every time O opens his mouth, he makes himself less and less believable. He is the laughing stock of the world…………and so are we for having elected him! For the free world to have any chance of survival, we need to get rid of him NOW, and being as we “can’t” impeach him, then a hit man, whatever…..one life in exchange for the rest of the world would be a bargain. I know what that sounds like and can hardly believe I’m saying it, but given the thousands who have been killed and millions who have been displaced, his death would be nothing. Also, the stronger ISIS gets, the more nuts will join around the world because it encourages them. You have to believe this has been considered in some circles in D.C., perhaps even the CIA or our military?"


Also this from our Conservative friends who claim the Left's rhetoric is violent:

A North Carolina woman raked in nearly four grand on Thursday selling “Killary Rotten Clinton” targets at a rally for Donald Trump, according to reports.
Posted by Shaw Kenawe at 8:51 AM

The right wing bloggers are dishonest and in this case hysterical liars. But, as I wrote on RN's blog, they're probably frustrated at how the Trump-Russia scandals are growing as the investigations widen, and so they jumped on this recent shooting tragedy as a chance to smear the Left. The problem for them is that they forgot about the awful violent rhetoric they heard and did nothing about during the Obama administration. Violent rhetoric and easily available lethal firearms, plus mentally unstable people in the general public is a recipe for what happened in Alexandria, Virginia.

The far right are moral cowards and shameless in their effort to place all the blame on the Left. We must never let them forget that they put a morally deficient bully in the White House.

"I love Irony. Irony is my life preserver, the thing I cling to to keep from drowning in cynicism and despair. Steve Scalise: I hope he recovers and wakes up to the sharp aroma of the irony of being saved by two black cops, one of whom is gay because he's a self described racist and homophobe. "A David Duke without the baggage" were his own words and if he's not carrying baggage, it's because he expects a black man to do it for him. Irony, Karma, payback -- call it what you like but it's a teachable moment as the cliche' would have it. Get better Steve and I mean that in more than one way."


The extremist righties are always the first to point fingers and blame and always forget their own disgusting calls for murdering Democrats. They're such crybabies and liars.

Excellent work my friend. The lies, deceit, and evil of the extreme demented right must be exposed and reexposed. You do that well. Thank you.