Be Afraid, Donnie, Be Very Afraid...


They include men and women responsible for bringing down Nixon, Enron, and the mafia.


As Donald Trump and company continue their audacious plan to humiliate each and every American with their constant incompetence, one man is pushing to find the truth about the president and his cronies' connections to Russia and their clumsy, foolish, shockingly transparent attempts to cover up any wrongdoing. That man is Robert Mueller, the special counsel appointed by the Justice Department to lead the investigation, and a new story from Politico paints an interesting portrait of the team Mueller is assembling. In fact, I'm pretty sure, if I were Donald Trump, that this news of this team would make me very, very nervous.

He already has picked three former colleagues from his last job as a partner at the Wilmer Cutler Pickering Hale & Dorr law firm: Aaron Zebley, who also was Mueller’s FBI chief of staff; Jeannie Rhee, a former DOJ attorney; and Quarles, who got his start in Washington some four decades ago as an assistant Watergate prosecutor.

But Mueller’s biggest hire to date was [Andrew] Weissmann, who is taking a leave from his current post leading the Justice Department’s criminal fraud section. The two men have a long history together at the FBI, where Weissmann served as both the bureau’s general counsel from 2011 to 2013 and as Mueller’s special counsel in 2005.

Weissmann’s prosecution record includes overseeing the investigations into more than 30 people while running the Enron Task Force, including CEOs Kenneth Lay and Jeffrey Skilling. And while working in the U.S. attorney’s office in the eastern district of New York, he tried more than 25 cases involving members of the Genovese, Colombo and Gambino crime families. 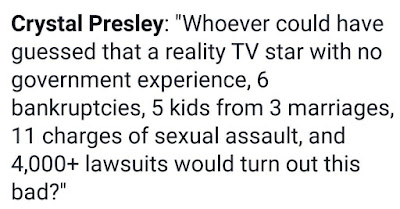 For a great take on Lord Dampnut, read this:

"Trump and the True Meaning of 'Idiot' "

The wingnuts are still pretending tRump isn't in deep doo-doo, and they're blaming Comey for all the trouble tRump is in. They are hanging onto whats left of their delusions.

Heard Trumps attorney is considering firing Mueller. I suppose the fact that Mueller just brough Michael Dreeben, attorney into the investigation has scared the crap out of them....as it should. Mueller must have discovered much, much corrupition. Imagine that!!!!

Congratulations Donald John Trump. You are indeed the subject of the country's biggest criminal investigation by the country's best investigative team ever. Your impeachment will make the greatest headlines worldwide and will have a record breaking viewership. Your following criminal trial will be the biggest and best trial ever, even beating out the OJ trial in TV ratings.

You will go down in history as the absolutely best worst-president-ever.

Loved the Times article. I'd forgotten the original meaning of idiot. Love this line:

The idiot, then, was a threat to the city-state, to public life, and to the bonds that make communication and community possible.

Personally, I'm loving every second of his agony. You can see it in his pinched, weaselesque face, too. He's miserable which brings joy to my heart. :)