The US is now the laughing stock of the world

"[I]t pains me to write this — our president acted like a clod, a heartless and dull-witted thug….. One is prompted to ask if he is off his rocker. But this is vintage Trump — impulsive and cruel, without an ounce of class or human decency. His behavior no longer surprises us, but it should offend and disturb us."


And that's where it gets interesting. In writing "us," Rubin is pointed. Trump's conduct does offend and disturb everyone outside Trump's thirty-something percent.

And yet "his fans," who should be offended and disturbed, "hoot and holler" instead, "seeing this as inconsequential or acceptable conduct." Many of these fans "lecture us on President Obama’s under-appreciation of America’s unique place in human history or proclaim that they simply had to vote for Trump because Hillary Clinton was some sort of monster," continues Rubin. They are now "exposed as fools or hypocrites or both."

Why should Rubin give us an either or choice. Trump's supporters are both fools and hypocrites.

Trump claimed our country is the "laughing stock" of the world.

He's correct about that.

This cartoon is from Australia -- laughing
at the US President.

The world is laughing at Trump. He represents America.
SAD! 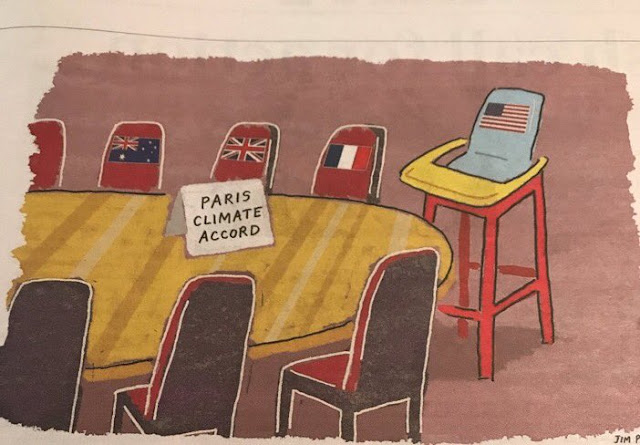 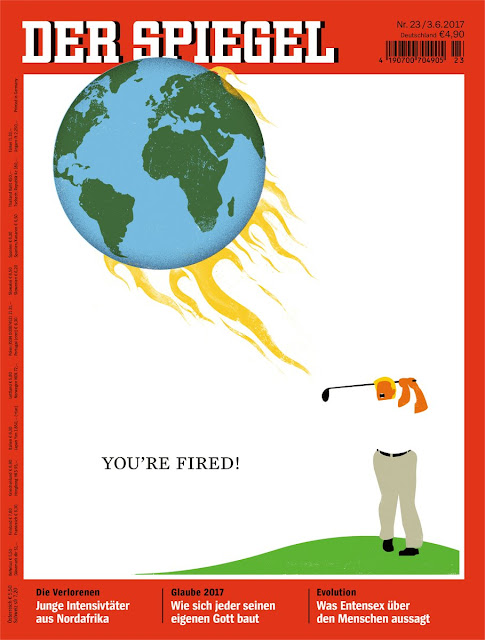 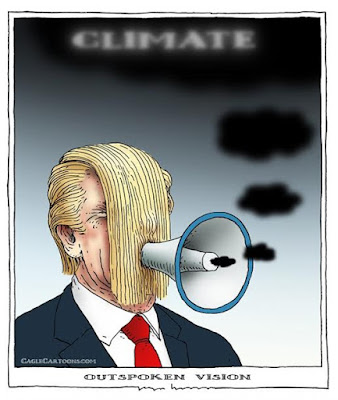 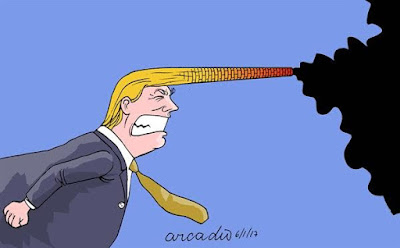 And finally, the mayor of London just told the world that Trump isn't important:

"We wound up with this president because millions of Republicans could not prioritize character, decency, and overall fitness to serve over their mundane and frankly petty partisan wish list (28 percent top marginal tax rate!)." --Conservative writer Jennifer Rubin

This is the truth and why so many Americans deeply resent Republican voters right now. Republicans can no longer pretend that they are the morally superior party or the party of family values. That ended when the put Trump in office.

I love my country. I hate what it did last November.

Good republicans and independents that willingly and knowingly overlooked Trump's glaring character flaws as well as his lack of qualifications now must live with themselves.

Trump's impeachment or resignation can't come soon enough. Pence isn't much better with respect to agenda and policy but he is light years ahead of Trump when it comes to diplomacy.

Under Trump America is a great nation diminished.

No doubt, RN, Americans who truly love their country are courageous enough to acknowledging that Trump was a YUUUGE mistake. Several GOP friends have said as much to me. They've said they thought he would become presidential once he took the oath of office and that his boorish behavior and inane tweeting would stop once he understood the seriousness of his position as POTUS.

There are millions of his supporters who see nothing amiss with this know-nothing bully. As I've said many times, those people are terminal ideologues who've put party above country. One thing we absolutely know for sure about them is that their so-called "moral values" are worthless. Never, never, never will they be able to take the moral high ground again because of their support of this amoral fraud. No matter how many "Sunday Faith" posts they publish.

They're as fraudulent as the man they continue to support.

“According to the latest Gallup daily tracking poll, the president's approval among American voters dropped 6 percentage points in just one week, falling from a two-week high of 42 percent to 36 percent over the weekend.”

IT SEEMS THAT NO ONE GIVES A CRAP ABOUT IT OTHER THAN YOU SHAW.

The media Russia LIE, OR SHOULD I SAY EXCUSE has been going for over 6 months without one piece of evidence. No telling how long this latest lie will run, and no telling how many gullible fools believe the crap that you post on your blog. But Keep dreaming, maybe in 7 ½ years Trump won’t be President any longer.

And by the way, your DUMB pictures only make YOU look DUMBER that you already are.

MKIA wrote: "The media Russia LIE, OR SHOULD I SAY EXCUSE has been going for over 6 months without one piece of evidence."

As I've said many times, there's no hope for them. They are terminally doomed. But as a result of their monumental stupidity, we all are suffering with the baboon they supported.

How embarrassing for our country! Theresa May has sided with the mayor of London and rejected Donald Trump's stupid attack on Khan when he call him "pathetic." Even the US embassy dismissed Trump's idiotic tweet. When will his supporters realize Trump's a horrible mistake and join the rest of this country and the world in rejecting him?

Trump’s message was divisive, while Clinton sent out a call for unity and peace. At a time when Trump currently has a historically low 36% approval rating, it appears that America is admitting that the wrong person is in the White House.

Mr. Doesn't Know Much of Anything clearly doesn't understand how polls work. Listen up, Genius - popularity = polls = what people care about. Rinse and repeat until you grow a brain stem.... Settle in everyone, this is gonna take awhile.

So Ms.Shaw, let me get this straight. Anyone who supported DJT is...deplorable, monumentally stupid, uninformed, unpatriotic and borderline insane.....damn, that's 60 million of your fellow American's.

Anon wrote: "So Ms.Shaw, let me get this straight. Anyone who supported DJT is...deplorable, monumentally stupid, uninformed, unpatriotic and borderline insane..."

PS. You don't need an apostrophe to make American plural. A simple "s" does the trick.

Yes anonymous, true and fair enough. But, a certain number, likely millions, are realizing and accepting they made a horrible mistake. They no doubt will vote differently in the future. Perhaps even switching party affiliation.

Trump very badly damaged the Republican party (tribe). The smarter and truly patriotic republicans are beginning to realize this. Where do you stand?

Trump Is Now Lying to His Own National Security Staff

Ms.Shaw, my point was that 60 million Americans (thanks for lesson Miss Crabtree) went to the poll's and rejected progressive policies. Were each and everyone of them monumentally stupid and you really want to compare them to supporters of Hitler, Mussolini and Mao.....that's a bit of a stretch, don't you think.

In order to surpass Bush he will have to kill a couple of hundred thousand innocent people and crash the economy. I have faith Trump can do it!

"anonymous" is trying to prove you right about tRump supporters...

"Ms.Shaw, my point was that 60 million Americans (thanks for lesson Miss Crabtree) went to the poll's and rejected progressive policies. Were each and everyone of them monumentally stupid and you really want to compare them to supporters of Hitler, Mussolini and Mao.....that's a bit of a stretch, don't you think."

No. The Germans, Italians, Chinese, and Cubans were as bamboozled by demagogues and authoritarians as Trump voters were. It is an apt comparison. But to correct your mistake: A majority of Americans rejected Trump. A 3-million vote majority.

Apostrophes are not decorative punctuation marks to be tacked onto words to make them look pretty. They are used to show possession or omission. "Polls" is plural with no apostrophe needed.


Oh Ms.Shaw, you mean those three million coastal liberals? Does that mean Hil is president of either California or New York?

Anonymous: "Oh Ms.Shaw, you mean those three million coastal liberals? Does that mean Hil is president of either California or New York?"

This is the last comment to you, anonymous troll.

The 3 million "coastal liberals" who voted for Hillary are counted the same as the voters who came from red states. In this country, all votes are considered AMERICAN votes, and each one is worth exactly the same as the other. One woman/man, one vote. So giving those voters a label is meaningless and a deliberate tactic to mislead and change, and alter the fact that 3 million more AMERICANS (we are, after all, AMERICANS before we are Californians or Floridians) voted for Hillary not the abomination that is a national and international embarrassment - Comrade Trump.

Wow! Anonymous spells as badly as does Trumputin. "John Barron" is that you?

Our allies detest him:

London mayor calls for cancellation of Trump visit to UK

LOL! What a freakin' disaster. Londoners don't want his fat carcass. And neither do we!

Anon, I knew Mrs Crabtree. She was a teacher of mine. You'd have failed her first grade class miserably.

And to answer your question... it's starting to look like it, or monumentally wrong.